The rains were round the corner and since long we had not been to our sojourns. We had postponed the trips for last couple of months due to expected new arrival in my family and as soon as he was at home and started settling down, I thought of venturing out once again.

This time Abhinawa came up with the plan of Huthridurga, a hill on Magadhi road. But Lo! the rain God had some other intentions - at least that's what it looked like. The drops from the heaven started descending on our planet. But thanks God, the drizzle was short-lived and with a couple of rounds of 'Yes'/'No', we were finally determined to start on our journey.

This time we had a couple of new people in our team. Rajesh finally made it after along gap. Saurabh amde a debut. Also, we had with us, the wife of Sanjeevi for the first time. A good team of 12 people started from Kalyani Magnum.

A long drive on Nice Road till Magadhi Road exit and then ahead, took us to Magadhi. We continued beyond, looking for directions as suggested in the route chart we carried with us. That brought us to the vicinity of the hill.

We stopped at a place to ask for direction and this is what a villager told us:

Well, Hotel and a town at this place. That sounded music to the ears.

We drove for almost 200 mtrs and could see a right turn adjacent to an open field. In the name of the hotel, we could locate a 'chai ki tapri' or a small tea stall. So much for a hotel indeed!

Drive further took us up the hill and be were perplexed if the days journey is to be done on four wheels in stead of trek that we intended to do. Finally we reached the so-called 'town'. It was a small hamlet of around 10-12 houses. Parking space was not a problem.

We started walking from there and after crossing a field, we were finally climbing up the hill. The climb took us through two sets of walls. At one point, it seemed impossible to climb us due to lack of path. Then we realized that the path lied hidden behind a wall of bricks. good deception for a forte! 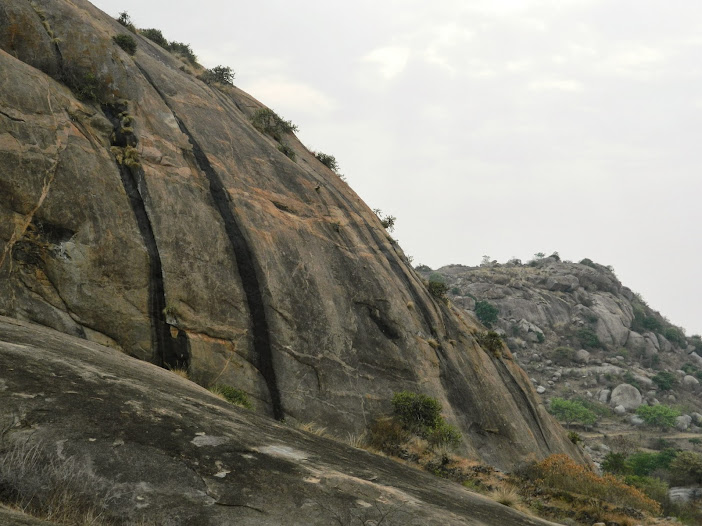 This hill had steps at some places and slots at others while at some oethr places were plain rock to climb upon. The ascend was not much neither the distance nor the inclination, but it was fun to go up. Climbing, stopping for breathe and water, chatting, climbing, stopping..... we reached the hilltop where there was a temple, as it is the case with most of the hills we went to.

a nice rest gave way to chatters and gossips. Since most of us were from office, most of the incidents recited on top of the hills were form office only, which had to be decoded and explained to those, who did not work with us.

Overall, a nice trip - nice enough to keep the motivation high for the next one. The next one is on 1st of June, by when Abhinawa would be back after losing his Bachelorhood - Anyone wants to join?

My Speeches at ToastMasters