So last week it was a repeat of Savan Durga climb. The hill is one of the largest monoliths known to the humankind. It is situated near Ramgarh (Gabbar's den). You can either drive down to Ramnagar and take a right turn from the main signal of the town and drive down to this hill or while getting out of Bangalore on Mysore road, take a right turn near Raja Rajeshwari Dental college and continue on your journey towards Savan Durga. As with any other famous destinations, you don't need to ask anyone about the place. The moment you slow down and show inquisitiveness to the passer-by, pat would come the reply "Go straight, take right/left etc) and lo the distance remains around 16 KM for more than 20 KM of drive, before you see a yellow board on your right side telling that the hill is another 16 KM, officially. The road is not so good beyond this point. But not so bad either. Whats the fun in having an urban road while you are driving in wilderness!

Once we reached there, it seemed impossible to reach to the top. The scene in front of us was intimidating to say the least. However if others have reached to the top, so could we, drove us ahead. We found that the road to the top is from the back side of the hill (why am I not surprised!). 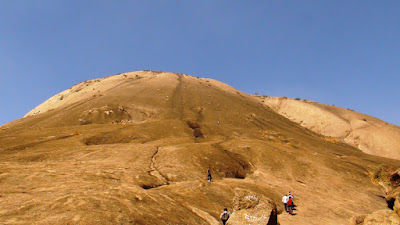 First time when we had gone to the place, we had taken a wrong route and ended up in big bushes and rocks. Cleared them to make way and reached to the place, where hard rock in all its glory was challenging us. The climb was too steep to be true but we started. Having climbed a few feet, we realized our mistake and took the right track. The right track, incidentally, has marks made on it and following the electricity pole seemed to be the mantra. When we went to the place the second time, we took out learning from the first trip and avoided the mistakes. Arrows have been put in place to guide the trekkers and the job is much easier (not the climb though).

This climb has a steep rise and that takes toll on the lungs. People start huffing and puffing and feel like giving up. But I was surprised how my dad, at the age of 65 kept on going with some small breaks.

The bottom of the bill boasts of a temple and the top has a dilapidated forte to its credit. The fort was surrounded by two layers of walls at a reasonable distance. The space between the two walls is barren and that must have given this place a strategic advantage. Enemies certainly cannot make it to the top if the walls are being manned by warriors worth their salts

First wall conquered and the climb becomes steeper. It is very important to take the correct route here. We attempted a route, which seemed shorter and were welcome with a climb at almost 90 degrees. Two of us could cross that with the help of a thrid person, who was with us but it was dangerous for us to pull the third person up as gravity may play spoilsport any time. Finally third person was asked to take the route taken by other people of the group, the longer one but lot safer. Second time, we refrained form such Harakiri. even the alternate route is steep but slightly lesser than the primary one. This route also has notches created in teh rock for the climbers to put their feet in. A set of 4 notched have been made through out the steep, which ends up at the second wall.

Second wall deserves a break due to the view it offers....

The slopes are not steep beyond this point. There is a shelter near near by, where we took rest and gulped water to prepare ourselves for further climb to the top of the hill. dogs were our faithful companions at this point too. Both the times we went there, we found couple of canines waging their tales and expecting some edible items from our bags. 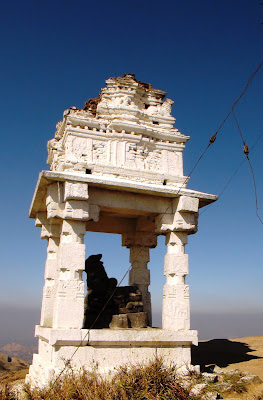 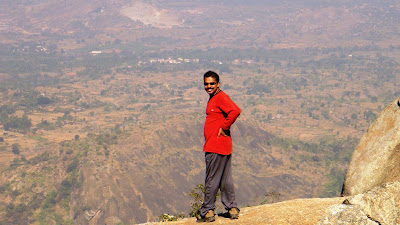 After a brief rest and gup-shup, we started again. The climb further is very small and does not take any toll on body.

At the top there is a statue of Nandi in front of a temple. The base of the statue made a good place to put our bottom at and relax. The breeze invigorated us and all the tiredness once again melted in the air. Sitting at the top, breeze hitting the face, perspiration drying off and the greenery till a far away distance was enough attraction for us to plan for another trip.......Hopefully within 2 weeks. 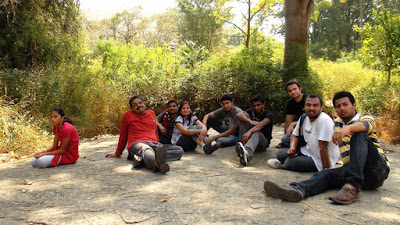 Till then...let me climb down form the high and get to the hard facts of reality.

Magnificent goods from you, man. I have understand your stuff previous to and you are just too wonderful. I actually like what you have acquired here, really like what you are stating and the way in which you say it. You make it enjoyable and you still care for to keep it wise. I can't wait to read far more from you. This is actually a great website.

You are my intake , I’ve few blogs and often run out from to post .

My Speeches at ToastMasters